This device will emit a steady 'beep' if you have inadvertently left your lights on. The logic of the circuit is such that the 'beep' will only sound if the ignition is switched off (key position '0' or 'B'), the lights are switched on and either door is open. It has been fitted to a 1999 Chimaera 450, but fitment should be the same for other models.

Velcro - In true TVR fashion, the relay and the buzzer were both mounted using Velcro! The buzzer was mounted in the bottom section of the cowling around the ignition switch. The relay was mounted on to the bottom surface of the dashboard panel, just above the steering column. Note the back edge of the ignition switch cowling, just visible at the top of the photograph (taken looking upwards from the footwell).

Diode - As the door switch circuit is also used by the alarm and central-locking systems, a diode is required in this part of the circuit to prevent a possible unwanted interaction between those circuits and the lighting circuit. I used a 1N4001 (from www.cpc.co.uk) which is commonly available from other sources. 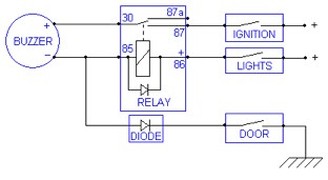 I spliced the connection to the door switch circuit where it exits the back of the dashboard en route to the main fusebox. Carefully, I cut the loom tape back and found the door switch wire: in my car it is white with a purple stripe. I identified it by using a multimeter to measure the voltage between it and 'ground'. It should be at battery voltage (in this case a healthy 13.6V) with the doors closed, falling to 0V with a door open. Alternatively you could route the cable along the inside of the sill and make the connection at the door switch itself.

Decide where to mount the relay and piezo buzzer and identify the location of each connection you will be making. Run the necessary wires from point to point, cutting them to length as you go. Use a small piece of insulating tape to hold the wires together. Where wires need joining together, eg. between the buzzer and your new loom, the best way to do this is to twist them together, solder them, then insulate the connection preferably with shrink tube, but you could also use insulating tape. The wire from relay terminal '85' needs to be joined to the negative wire from the buzzer. This can be done by soldering both to the 1N4001 diode's leg (the leg opposite the silver band painted on the diode's body). The wire to the door switch can then be soldered to the diode's other leg (nearest the silver band) and the whole lot insulated with shrink tubing or insulating tape. Now bare the wire ends and fit the Lucar connectors. Make all the necessary connections, stick Velcro in the chosen locations and on the buzzer and relay and test.

If the device is working properly, wrap the loom tape tightly around the finished bundle of wires. The loom tape is not adhesive, so the loose end will need to be secured with insulating tape.