About the TVR Chimaera

The TVR Chimaera first appeared in 1993 and it was intended to be more of a GT car than its sibling the TVR Griffith. Although it shares much of the chassis and mechanicals it features a larger boot and slightly softer suspension. Both models use a Rover V8 engine ranging in size from 4.0 to 5.0 litre providing hair raising levels of power and acceleration.

In 1994 both the Chimaera and Griffith 500 switched to a Borg Warner T5 gearbox (the previous unit coming from a Rover SD1). Shortly after that the TVR Chimaera 500 was launched.

Then in 1996 the Chimaera received a minor facelift, the front end becoming more like that of the Cerbera. The mesh grille was removed and a horizontal split added across the grille space and indicator. In 2001 the Chimaera was given Griff style covered headlights.

In around 1997-1998 the rear lights changed from a parts bin Fiesta unit to a TVR designed part.

Click to enlarge and to find out more about each photo 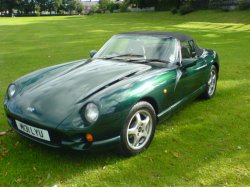 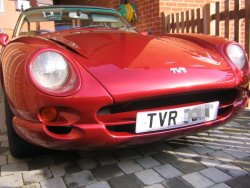 1998 Chimaera 500 with the later Cerbera style front end. Note the horizontal split and removal of the grille. 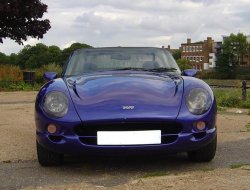 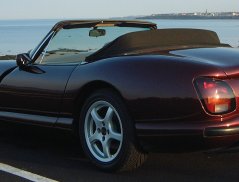 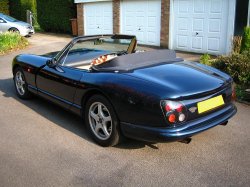 Of over 6000 TVR Chimaeras built, only around 600 were the 5 litre model. These relatively rare machines can be identified by their purple coloured rocker covers and 'Griffith style' wheels. They are probably the most desirable of the Chimaeras, with levels of performance close to that of the Griffith 500 whilst retaining greater practicality. NB. Sometimes you see adverts for 'TVR Chimaera 500/5.0 HC', all of the 500s are 'HC' so don't pay any extra...

TVRs have always had their quirks but here are a few that are worth knowing:

Here are some quotes regarding the TVR Chimaera from the motoring press of the period:
If you have any updates, info or photos you would like to share, please contact us.